The Florida Panthers have announced that they’ve acquired defenceman T.J. Brennan from the Buffalo Sabres for a fifth round pick.  Brennan was drafted in the second round by Buffalo in the 2007 draft, has appeared in 10 games so far with the Sabres this season with one goal that was scored on the power play.  Brennan is a left handed shot, and is listed as 6′-1″ and 214 lbs.  There’s an offensive upside to Brennan as he has had success scoring goals in the AHL with Rochester and Portland in the AHL, as well as during his time in juniors with St. John’s.  Brennan will be no stranger to head coach Kevin Dineen.  Dineen coached Brennan for two seasons at Portland and is obviously familiar with what the young defenceman can do.

END_OF_DOCUMENT_TOKEN_TO_BE_REPLACED

Panthers’ Goals Against Problem Has No Easy Fix

Shortly after Scott Clemmensen surrendered the second goal of the first period against the Carolina Hurricanes on Sunday night, the boos began to rain down from the stands.  A chant of “We want Markstrom” formed shortly after.  It appeared that the Panthers crowd finally lost all patience with the veteran backstop, and for good reason: Clemmensen’s stats this year are simply subpar to say the least, and four crappy periods against the division rival Hurricanes would sink his numbers even further.

At intermission, the venom spewed in Clemmensen’s direction was reaching an all-time high: fans on Twitter demanded that Clemmensen be subbed out in favor of the young Jacob Markstrom, who was totally not in a position to play after not practicing for days and just getting his pads at around the time the puck dropped.  At least a couple fans even maintained that they would refuse to renew their season tickets if Dineen didn’t pull Clemmensen.  And maybe the Panthers coach might’ve consideredswitching the struggling netminder out in favor of the potentialed Swede, if he thought it would make any difference.

END_OF_DOCUMENT_TOKEN_TO_BE_REPLACED 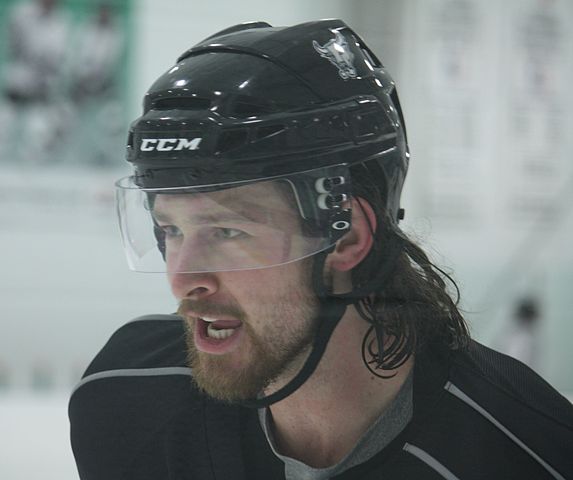 Colby Robak warms-up before a game at the AT&T Center in San Antonio, Texas (Photo by Amanda Land).

Fans in San Antonio and around the American Hockey League have anxiously been awaiting for the puck to drop again, and this weekend they finally got their hockey fix once again. The San Antonio Rampage kicked off their 11th season Saturday night against the Texas Stars. The Rampage got a taste of what to expect opening night in two pre-season games against the Stars, which they lost by scores of 4-1 and 3-0 with Drew Shore being the only one to crack the Stars’ defense.

Opening night started with a tribute to Jessica Redfield, one of the victims of this summer’s Aurora, Colorado movie theater shooting. Redfield, a San Antonio native, interned with various media outlets in San Antonio before moving to Colorado and was a huge hockey fan. After her parents performed the opening puck drop, the Rampage’s season was officially underway. The Rampage got their first power play of the season 32 seconds into the game when Reilly Smith was handed a two-minute penalty for interfering with Rampage goalie Dov Grumet-Morris. The Stars opened the scoring during the fourth minute of play when Cody Eakin set Kyle Fortunus up for first goal of the contest. The Stars struck once again with Jordie Benn assisting on Toby Petersen‘s goal with less than 4 minutes remaining before the buzzer sounded to signal the end of the first period. Things got rough in the third period just over a minute and stayed that way all throughout the third. The two teams racked up a combined 47 penalty minutes before the final buzzer sounded, with a number of those coming from Eric Selleck at the 6:28 mark when he was assessed a 2-minute roughing penalty, a 5-minute boarding penalty, and game misconduct for boarding. This was the Rampage’s first game misconduct since the 2010-11 season. In the final minute of play. Drew Shore finally netted San Antonio’s first goal of the season with Tyson Strachan and Jon Rheault picking up their first points of the 2012-13 season. Unfortunately the comeback came a bit too late and the Rampage fell to the Stars once again, but this time by a final score of 2-1. END_OF_DOCUMENT_TOKEN_TO_BE_REPLACED

Colby Robak- Now in his third AHL season, Colby’s adjusted to the AHL quite nicely. Last season he earned a call up with the Panthers and Florida fans got their chance to watch him play.I’m curious and excited to see what Colby will do this year. His offensive contributions always make him an exciting player to watch. During his first year with the Rampage, he set a single season record for the organization when he racked up 39 points throughout the year. Let’s see if he can manage to break that record this year.

Alex Petrovic- Petrovic spent last season with his the Red Deer Rebels of the WHL and joined the Rampage for the last five games of the regular season, and for all nine post season games. He assisted on a goal during the regular season and added two goals and four assists during the playoffs. In 68 games with the Rebels he tallied 12 goals and 36 assists and picked up 141 penalty minutes along the way. I’m looking forward to how he will transition into the AHL level of play full time this season. END_OF_DOCUMENT_TOKEN_TO_BE_REPLACED

What Does The Gudbranson Injury Mean For The Panthers? 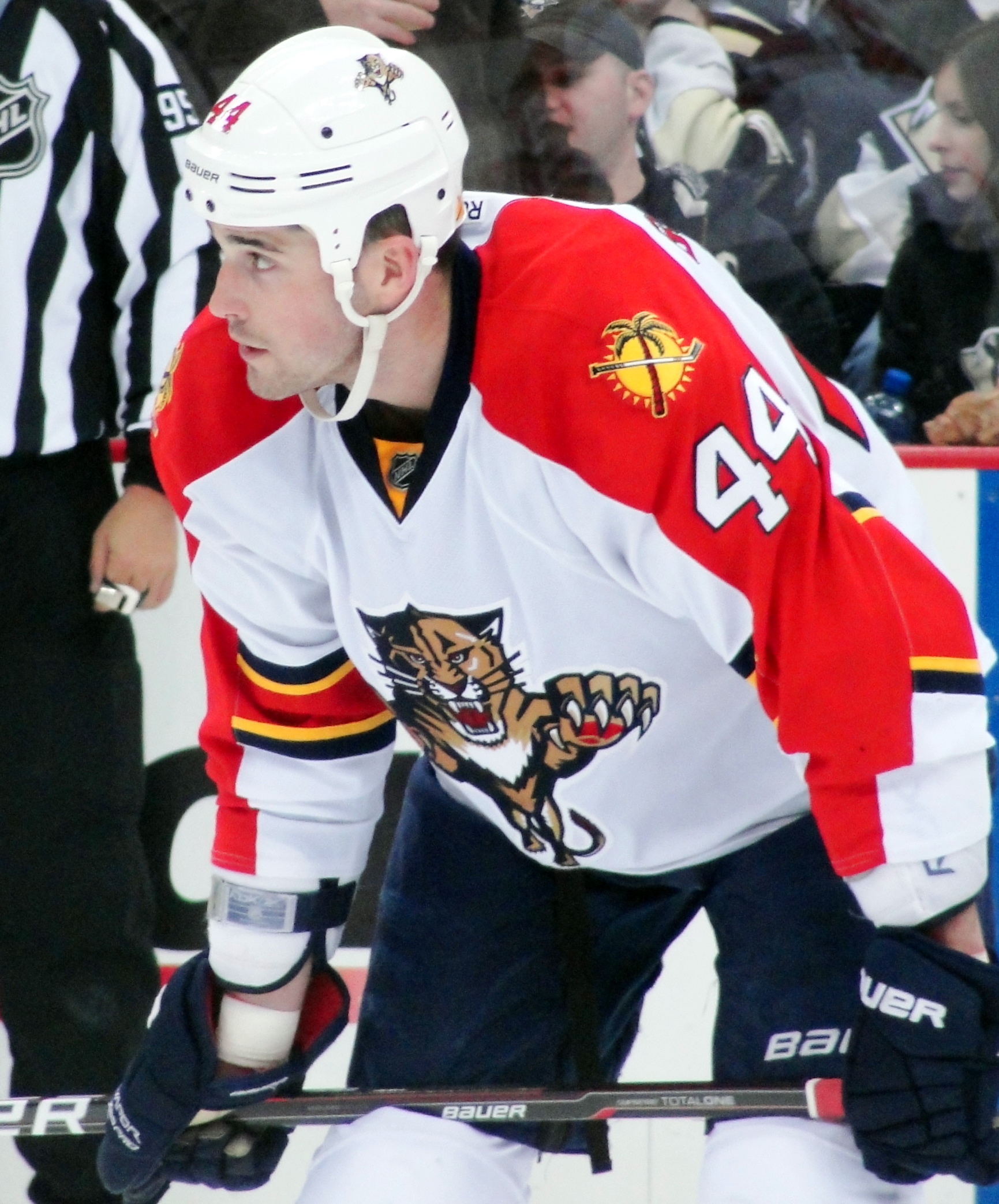 Erik Gudbranson’s reported injury means there might be a shake-up on the blue line. Photo Source: Michael Miller, Wikipedia Commons

Yesterday at the Saveology.com Iceplex, a metaphorical wrench was thrown in the Panthers’ plan for the upcoming year.  Erik Gudbranson, in an informal workout session, apparently badly injured his shoulder.  Even though he received treatment right away and the Panthers have yet to announce his injury, Harvey Fialkov of the Sun-Sentinel was tipped off that Gudbranson could be out of action for up to four months.

Gudbranson could still be considered the Panthers’ sixth defenseman, even after his ice time increased late in the season and during the playoffs last year.  His NHL stats, though they aren’t spectacular (2 goals, 6 assists, -19 plus/minus, 78 penalty minutes), were decent enough to hold off his competition and keep his spot on the blue line.  As the year progressed, you could really see coach Kevin Dineen‘s confidence in Gudbranson grow.  His ice time grew, he took more chances in the offensive zone, and he took more faceoffs in his own zone - I detailed his progress as a player about a month ago.  Most people were looking forward to see if Gudbranson’s second NHL season would push him up to star status.