The Florida Panthers have announced that they’ve acquired defenceman T.J. Brennan from the Buffalo Sabres for a fifth round pick.  Brennan was drafted in the second round by Buffalo in the 2007 draft, has appeared in 10 games so far with the Sabres this season with one goal that was scored on the power play.  Brennan is a left handed shot, and is listed as 6′-1″ and 214 lbs.  There’s an offensive upside to Brennan as he has had success scoring goals in the AHL with Rochester and Portland in the AHL, as well as during his time in juniors with St. John’s.  Brennan will be no stranger to head coach Kevin Dineen.  Dineen coached Brennan for two seasons at Portland and is obviously familiar with what the young defenceman can do.

END_OF_DOCUMENT_TOKEN_TO_BE_REPLACED 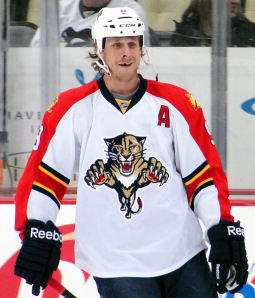 END_OF_DOCUMENT_TOKEN_TO_BE_REPLACED

Tags: Around The NHL

If you’re a fan of goals, be sure to tune in early to watch every Florida Panthers game as you’re practically guaranteed to see one. Coming into Thursday night’s 4-1 loss against against the Boston Bruins, the Panthers had allowed a goal in the opening four minutes in four consecutive games, usually in the first five shots allowed. Zdeno Chara kept the dubious streak alive 3:53 into the game on Boston’s fourth shot when his point shot blast beat Scott Clemmensen for a 1-0 lead.
END_OF_DOCUMENT_TOKEN_TO_BE_REPLACED