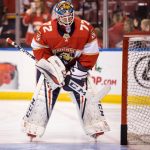 Do you stay up late at nigh wondering what the Panthers will do about Sergei Bobrovsky? Fear not! Panther Parkway has devised the solution to end the Bobrovsky nightmare contract and free up the crease for our Knight in shining armor! Read on to hear our solution!

If you’re a Florida Panthers fan, your playoff viewing experience probably had you sounding a lot like Mark Wahlberg in the movie “The Other Guys.” It was a recurring theme for me every time another goal went in for Tampa to scream “It’s a bad time Bob!” …..It was exhausting watching the lead slip away in Game 1 as the Tampa Bay power play scored at will. When Brayden Point collected the puck with a minute to go every Panther fan’s heart dropped knowing that this save probably wouldn’t be made. Sure enough, Point buried it and won the game. Five-hole…again.

It wasn’t just Game 1…Bobrovsky somehow managed to have the worst stats (.841 SV% 5.33 GAA) of the three Panthers who manned the cage. That included a rookie in Spencer Knight who realistically should be learning from Bob at this stage, not taking his job in the most important Panthers series since 1996. It also included Chris Driedger who somehow managed to get torched for five goals in one period and still finish with better numbers than Bob. This can’t be the goalie we paid $10 million a year for. The results over the first two years of this contract have the entire franchise worried about the future in net for the Florida Panthers, and the salary cap issues that are at hand.

Zito has shown that he will make moves to shed the players who don’t meet his standards. Brett Connolly is no longer here. Henrik Borgstrom was cast off. Mike Matheson wasn’t even given a shot at redemption. I would be stunned if Keith Yandle or Anton Stralman play another shift in Panther sweaters. The standard is different and the bar has been raised. If youth play better than veterans, veterans no longer have a job, it’s as simple as that.

But what do you do about an underperforming veteran who has an anchor of a contract with a no-move clause, and an underwhelming stat-line for two years in a row? A simple buyout would kill the franchise’s financial outlook for the remainder of this core’s prime years. There is no trade possibilities…no team in their right mind is going to commit to paying $50 million to an aging and statistically declining goalie over the next five years…Is this one task too tall for even Bill Zito? Does he have any tricks up his sleeve?

Well, I can’t answer that because I don’t know if Zito has a master plan to maneuver his way around this. But, I can say that we do! (Keep Reading!)

All we need is a little imagination, an understanding of the salary cap rules, some basic financial math, and a GM ready to think outside the box!

With the help of our very own, Josh Luecht and also the tools our friends at CapFriendly.com provide, we have a plan that has never been done before in the NHL and could become the new standard for killing bloated contracts weighing teams down.

A simple buyout would kill the team… extending Bobrovsky’s contract to 10 years and spreading out the money over those years the team would still have $6,800,000 against the cap in three out of the first 5 seasons…. see below

The talk of the Trade Deadline revolved around Tampa Bay acquiring David Savard by “renting” salary cap space from other teams. Could the Panthers trade Bobrovsky while retaining half of his salary to lessen the blow? Well yes…but no…. bringing the Bobrovsky cap hit down to $5,000,000 per season still critically handicaps the Florida Panthers while Barkov and Huberdeau are in their prime. Also, what other team wants Bobrovsky for $5,000,000 for 5 seasons? You can trade a player’s contract twice with retained salary so you could potentially create a three way trade…but does someone want Bob even at $2,5000,000? For 5 seasons? And the second team would have to pay that $2,500,000 out for 5 years…never going to happen. Which brings us back to square one!

But what if the Panthers could reduce their cap hit to Bob significantly? Here comes our proposal…. a three team trade, with 50% salary retained….and then an immediate buyout… Here is how that would change the situation….

This scenario may be our best bet at getting out of Bob’s contract with minimal damage our salary cap numbers over the next 5 seasons.

How would this work?

Retain half of Bobrovsky’s salary and trade him, carrying a $5 million cap hit along with a pair of draft picks (likely second round picks ) to a rebuilding team such as Ottawa for example.

The second team, Ottawa in this scenario, will retain 50% of the 50% on Bob’s remaining contract. This comes out to 25% or $2.5 million. Team 2  will trade Bob with his remaining $2.5 million to another rebuilder such as Buffalo, Detroit, or San Jose along with one of the two second round picks Florida sent them.

This final team will buy out Bobrovsky’s contract. This is the vital point in the whole process. Once they have bought out his remaining balance, he is bought out for EVERYONE INVOLVED. That includes the Florida Panthers. The cap hit charged to each team depends out the percentage of the contract they hold. Resulting in out breakdown above!

Aside from the inconvenience for Bob to collect so many payments of $900k and $450k from different teams (I’m sure he won’t be complaining about that), this scenario rescues the Panthers from salary cap hell and the two other teams involved will barely feel a dent making this a viable option. With the Luongo and Darling dead cap space set to come off the books in the near future, and contracts for Stralman and Yandle winding down, this is a move that generates huge savings for the Panthers and extends the championship window for some time.

But what about his no-move clause?

Oh yeah! I almost forgot, Bob may very well want to stay in Florida and could refuse a trade! Not a problem. Bobrovsky has to know his time is short…and in this scenario he get paid a lot of money to not play. He also then become a Free Agent and get to shed the weight of his contract and try to rediscover his game somewhere else.

Since Team 3 is buying him out and it’s not technically Florida, he could re-sign with the Panthers on a cheaper deal the next day after he is bought out. NHL rules restrict players from signing with the team that buys them out, but it says nothing about signing with the team that traded them to the team buying them out. He could realistically be traded off the Panthers and re-join the Panthers in a matter of 24 hours. We’ve seen this happen with Brooks Orpik during his late tenure with the Washington Capitals. He will still receive his money, but he’ll get a fresh start playing on a low-risk and low-pressure contract…either way he gets to change the narrative.

Some of you may be wondering if this means we can keep Driedger. Maybe. It certainly opens the door. This move is absolutely unheard of as it has never been done before. It’s such a crazy and outside idea that even CapFriendly had no math to explain it, and it had to be done here at Panther Parkway (credit to Josh Luecht and Tom McLean for running all the math and spreadsheets!). But we have a GM who is willing and capable of making these type of strategic and creative moves, and this particular one could save the franchise from a brutal contract. If he can pull this off, I will build a statue outside of BB&T Center in his honor.

This is a chess master’s move in a game of checkers, and you’d be hard pressed to find another way to shed this anchor contract in a way that doesn’t destroy the franchise’s future assets and flexibility. This may be the Panthers one shot, as crazy as it may seem. It’s just crazy enough to work, and we can only hope that Bill Zito has considered it.

We’d love to hear from readers what you think of this potential trade, and what other moves you’d make this off-season. Talk to us in the comments with your ideas and your questions!

Thanks for reading this article! You can follow along with Panther Parkway @pantherparkway on Twitter! You can also follow our writers: @FrankRekas, @fla_josh, @JacobWinans8, @spencer_hoag, @prudentia0, @Mandoman12! Make sure to follow and listen to our podcast @LOPanthersPod, The Panther Parkway Podcast on Spotify, Apple Podcasts, and Google Podcasts. All images unless otherwise noted are courtesy of @KimSmithImages