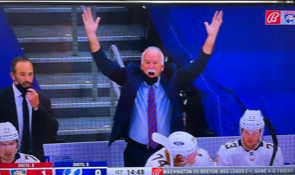 This isn’t the Florida Panthers team that you and everyone is used to.  Resilience, character and determination would be three words to describe last night’s overtime victory over the defending Stanley Cup Champs, the Tampa Bay Lightning.

It was essentially 4 games in one, as each period had each team making a statement.  It was however the final two periods, included the overtime where the Panthers made theirs.

The game started out quite perfectly for the Panthers who were on the road, facing a must win game, and needing to prevent themselves from going into Saturday down 3-0.  Two first period goals, one by Sam Bennett, who was returning from his one game suspension, and the other by defenceman Radko Gudas…..his first ever playoff goal.  These two scores took the home crowd out of the the game, as the Amelie Arena became a library for awhile.

Bennett, known for his playoff prowess continues to pay dividends for the two future second round draft picks that the Panthers paid to obtain him.  At this point, I’d make that trade everyday and 3 times on Sunday.  Bennett’s goal came at just under five minutes into the game, followed by the Gudas score at the 7:05 mark of the first.  If you were watching the game, you now moved to the edge of your seat, and maybe you also stood up for awhile as well.  You could feel the energy and confidence shift to the Panthers.

Then we have the second period, which saw the Lightning outscore the Panthers 5-1.  Three Tampa goals in the first nine minutes followed by an Alexander Wennberg goal to tie it at 3.  Unfortunately the Panthers took two penalties and on each power play the Lightning made them pay with goals by Brayden Point and Steven Stamkos.

Chris Dreidger who started his second game in a row would be finished for the night after surrendering five goals on 22 shots in two periods.  Some were his error, some were because of soft defensive play in front of him.  Regardless Coach Q had to use his hook and inserted Sergei Bobrovsky for the third period.

Trailing 5-4 I tweeted on social media that the Panthers needed to tie it up before the 2:30 mark.  My reasoning was that they needed to finish regulation at 5 on 5.  Pulling the goalie with less than 2 plus minutes trailing by one would be a necessary but dangerous proposition.  Gustav Forsling, known now as Bobby Orrsling, saved the night and tied the game with just about three minutes remaining in regulation.  Another find by Bill Zito, and a player who has continued to contribute.

That sent the game into overtime, but not before Anthony Duclair was called for a questionable cross checking call with 23 seconds remaining in the third period.  The Panthers bench, coaches included were livid.  Never one to complain about the officiating, but this one was an exception. Either call these types of infractions all night, or don’t call them at all, especially seconds away from overtime.  The games should always be decided by the players and not the officials.

Both teams exchanged chances in overtime, and you had a feeling that if the Panthers continued their push, and maintained their composure someone would come through.  But I’ll bet you the value of Elon Musks’ Bitcoin account that you wouldn’t have expected Ryan Lomberg to get the winner.

I said in my article earlier in the week, there comes a time in the playoffs where a particular play can change the outlook and outcome of a series.  Thursday night, Ryan Lomberg’s overtime goal could be that moment.

The Lomborghini as Randy Moeller calls him with an emotional and crucial winner that changes how we look at the Panthers chances on Saturday.  Lomberg had only 3 goals in 35 games this season, but for Coach Q to have the confidence in such a player to have him out there in overtime in a must win game says alot. Not only about Q, but about Lomberg.

Not to get lost in all the hoopla, but I cannot end without the major coaching decision of Keith Yandle being a healthy scratch.  No the streak isn’t over, because playoff games don’t count.  It was big news all day, but no one was sure it would happen.  Then when Yandle participated in the pregame skate, many thought that it wouldn’t.  Alas it did.  Tough spot for everyone to be in, but a message has been sent.  The Panthers have the depth to make such a decision.  It was the right call, as they won.  Hindsight is 20/20, who knows what would have happened had he played.  But know this…..during the playoffs, when his (Quenneville’s) teams win, there typically is not a lineup change going into the next game unless there’s an injury.  I’ll leave it at that.

Game four is Saturday at 12:30.  Being down 2-1 is a heck of a lot better than being down 3-0, and also to know that you could be back at the BB&T Center tied at 2 a piece makes for some interesting storylines.

Thank you for reading.

You can follow along with Panther Parkway @pantherparkway on Twitter! You can also follow our writers: @FrankRekas, @Josh_LOPanthers, @JacobWinans8, @prudentia0, @Spencer_hoag! All images unless otherwise noted are courtesy of @KimSmithImages